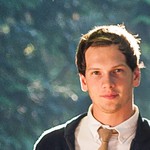 Richard Angelo Bergen comes from a family of five kids in which all of them studied very different subjects, but nevertheless remain the closest of friends. Richard became interested in literature in large part because he was trying to write songs for a hard rock band, for which he sang and played drums: thus, he became fascinated with the question of what makes poetry deep, eloquent, and electrifying. Richard teaches introduction to literature courses and has research and teaching interests in fantasy literature (especially C. S. Lewis and J. R. R. Tolkien), concept albums, journey and voyage narratives, metaphorical stories, and the raptures of Renaissance poetry. When anyone, himself included, studies a piece of art, there is always the possible tragedy of never noticing: never connecting to the focused or meaningful potentiality of experience that the writer allows. Richard aims in every one of his classes at Corpus Christi to enable moments when literature translates into wakefulness and enrichment.

Richard is currently working on finishing his dissertation and a book form of it, which is about the connection between allegorical stories and setting (A Theory of Allegorical Spatiality).

Numerous other works are in progress that relate to this connection (between allegory and place), including conference papers, and essays consigned for submissions to journals like Chaucer Review, Speculum, and Bunyan Studies.

He also has an essay on C. S. Lewis and historical philosophy, which is being published with Cambridge Scholars Press in 2020.

The University of British Columbia (2014-present) – PhD Candidate in English

“C. S. Lewis: Interpreting History as Interpreter.” The Inklings and Culture: A Harvest of Scholarship from the Inklings Institute of Canada. Cambridge Scholars Press, Forthcoming 2020.

Review of Paradise Lost and the Cosmological Revolution by Dennis Danielson. Culture and Cosmos 18.2 (Autumn 2014).

“Into the Cloud of Unknowing.” Short Educational film. Scripted, produced, and edited by Richard Bergen and Naomi Hogg. Uploaded to https://www.youtube.com/watch?v=ov7XY_d-sIk&t=123s (2011). With over 20,000 views.