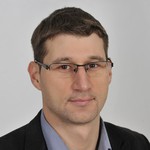 As a Fulbright Scholar in 2017 - 2018 (the University of Louisville, US), Andrei developed a study on great power strategy in the Asian-Pacific region. The courses he designed tackled key debates about global and regional security, economics/IPE, and the developing world order.

Between 2015 and 2020, Andrei published a number of articles and a book chapter, mostly analytical and empirical papers. The results of his study were presented at the Annual Convention of the Association for Slavic, East European, and Eurasian Studies (ASEEES), Korea-Russia, and China-Russia Forums. His current research project is the nature of the level of analysis and great power engagement types in international institutions, including the security framework on the Korean Peninsula (Six-Party Talks), Shanghai Cooperation Organization, etc.

Golobokov A.S. (2021) The effects of "thick reinforcement" in the Six-Party Talks _International Relations of the Asia-Pacific

Golobokov A.S. (2019) Russian Naval Activity in the Asia–Pacific: The Herald for a New Alliance? _The Korean Journal of Defense Analysis

Golobokov A.S. (2016) Various forms and mechanisms of Chinese-Russian cooperation in the energy sphere and the role of non-governmental structures. Pacific Science Review.