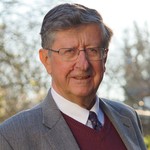 "Grace does not repress or ignore nature but rather builds on it and expands it (Thomas Aquinas Summa Theologica I,1.8)."

Paul came back St. Mark's College and to Corpus Christi College after many years of teaching interdisciplinary courses in Arts One and in Religious Studies at UBC and then at Quest University. For fifteen years he was also responsible for teaching World Religions and the History of Christian Thought at UBC. For these courses, in particular, he won the University Teaching Prize. With colleagues in the Faculty of Arts at UBC, Paul helped to begin the Major in "Religion, Literature and the Arts".

Paul studied Greek and Latin language, literature, philosophy and history at the University of Toronto before doing a program in Catholic Theology at the University of St. Michael's College. For his work in Ecumenism in an organization for theological students across Canada, the World Council of Churches arranged for him to do advanced studies in the history of Christian Thought at Oxford.

Here at Corpus Christi College Paul was Director and then Dean of Liberal Arts which meant that he was responsible for developing and integrating the whole curriculum around a contemporary version of the Liberal Arts grounded in the Catholic intellectual tradition. He enjoys working with colleagues at Corpus Christi to incorporate some of the innovations in curriculum design and in teaching styles which he had learned in his previous experiences at UBC and at Quest University.

He designed and taught the course “Explorations in Catholicism”  He also taught "World Religions". Recently to acknowledge the 500th anniversary of Martin Luther's 95 Theses, Paul team taught a graduate course on Augustine with Dr. Jason Byassee of VST..

Paul continues to research and to publish on major Christian Thinkers in the fourth century. He is particularly interested in the ways Hilary of Poitiers and Augustine of Hippo evangelized Christian and non-Christian members of the educated class of their respective generations. Integrating Catholic faith and public culture was also a challenge for Thomas Aquinas, as noted in the quotation above, and this task continues to be an important challenge for the Church of our own generation.